The second half of our two part series "Traditional & Tactile" takes us to the North Loop of Minneapolis.  We were greeted by a penguin graphic logo and a handshake from Paul our contact as we entered Cold Side Silkscreen Printing.  Paul led us into his office where we discussed his involvement in the business and walked us through the silkscreen process we were about to witness.

Descending an ancient wooden staircase, our feet landed in the basement where the screens were ready and waiting for further inspection and preparation before making the first test run.  Shimmering and translucent the screens floated by as they made their way upstairs for the operator to begin the process.  He taped off the sides and locked them down into position on one of several octopus-like arms jutting out from the center core.  With the screen in place, and palette knife loaded with thick titanium white ink, the first part of the t-shirt making process was ready to begin with the inking of the JCP badge logo.

An earlier conversation with graphic designer Jason Braun led to re-purposing the JCP badge logo and a few other existing graphic elements to devise an original t-shirt.  What better way to complement our first traditional & tactile letterpress experience with that of a custom silk-screened t-shirt bearing the logo and graphic elements of the JCP brand.

Cold Side has been in business since the mid seventies.  The environment has a laid back vibe which is a welcome nod to the era in which they began.  They always seem like they are up to something interesting and can accommodate just about any silk screen request for custom t-shirts.

We'll be on the road next week, hitting the streets of San Francisco for Target.  The project is motion based and will have us running multiple cameras: chasing bikers, runners and walkers as well as dropping in on a staged soccer game and outdoor yoga session amid a backdrop of the Golden Gate Bridge.  It'll no doubt be a fun hustle and another interesting collaboration. 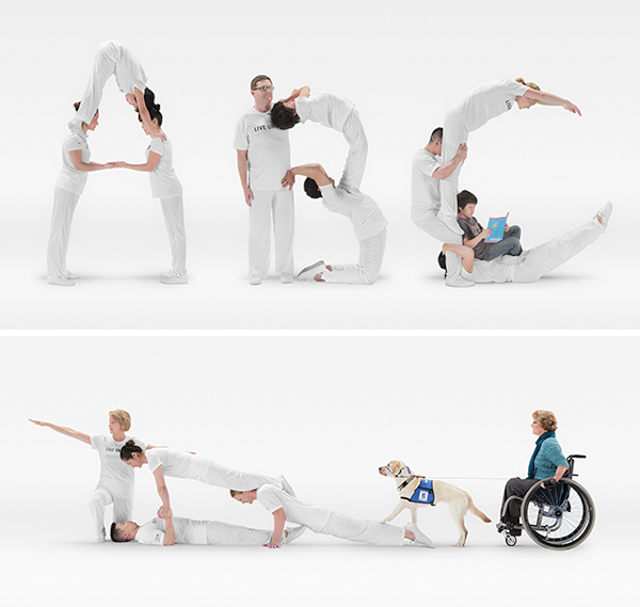 Behind the Scenes Video: -->
The name has changed several times since 1887, but the idea of fundraising and giving has remained the same all along for the United Way of America.  Through these efforts, they have been able to focus on select issues in diverse communities reaching into the areas of education, income, and health to name a few.

Earlier this Spring we were brought in on a still and motion project by Campbell Mithun to help create visuals for the 2012 United Way campaign "Live United."  We worked closely with the agency to refine the approach involving the talented performers at Circus Juventas in partnership with the United Way.  From the beginning the concepts were very literal in representing the ways in which the United Way helps out in the community.  The instructors at Circus Juventas provided us with their flexibility and strength to form and hold the shapes of the "A, B, C's," an outline of a house and even a ramp to help illustrate their commitment and involvement.  The final creative utilized the stills and video we created to help promote the collaborative nature of  the United Way and the great work they continue to do in the community.

This was an exciting project on a number of levels.  Shooting took place over two days, one week apart.  This added some challenges as far as time required to build and strike our set.  Lighting the scene, on location at Circus Juventas, required the combining of two 12' seamless backdrops as well as an elaborate lighting rigging, designed and engineered by local gaffer, Dave Underhill.  As this was a still + motion based shoot we used continuous lighting vs. strobe.  Motion visuals were shot on the Canon C300 which proved an amazing camera for it's low light shooting abilities for both standard + slow motion capture.

Above are the outdoor, billboard visuals, the finished :30 tv spot, and be sure to check out a behind the scenes video of the production created by the internal video team at Campbell Mithun.