Bringing Back a Life 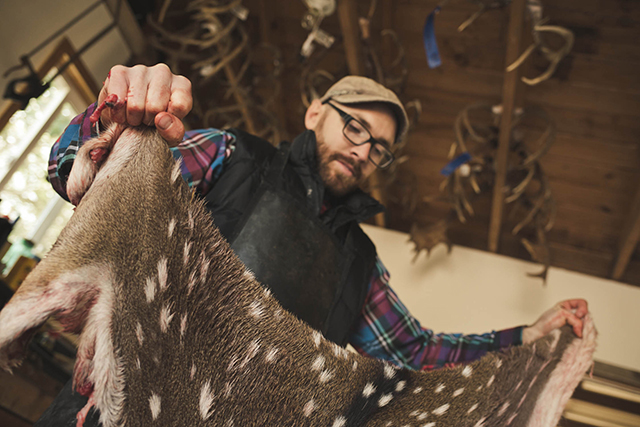 Tanning a hide, stretching it across a manikin, and mounting it to a wall is more about preserving a story than an animal skin. It is about connecting us to a moment we can never have back, but often wish we could.

Taxidermy is art that requires a death. It is designed to resurrect life. Each project begins by stripping an animal skin of its meat and internal organs before curing the epidermis to draw out moisture and blood. The first animal David Williamson fleshed was a lion. He was 11. At the time he thought it was cool. Then things changed.

Williamson is not what you might expect when meeting a taxidermist for the first time. He is not a recluse. He is not Norman Bates. Williamson is an affable father of two with a close shaved beard and the thick, black-rimmed glasses of an architect. Or in his case, a certified public accountant. As you walk up the driveway of his ranch home in Austin, Texas, the head of a nilgai – an antelope native to the grasslands of India – stares you down. Williamson is sweeping out the garage.

He hands you a mug of coffee and leads you to the backyard carrying two fresh deerskins. Sun streams onto a patch of grass covered with a wooden board. He examines a pelt draped across a plank. Underneath it blood-soaked salt dries brown in the sun. Williamson unfurls the two skins across the wood and reaches for a bag of salt.

“We are dealing with things that will rot or decay,” he says. 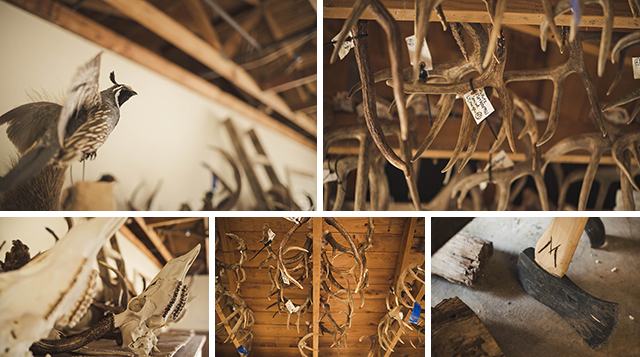 Williamson is a third generation taxidermist. He learned the science of the profession as a child in his father Robert’s shop, a building the two raised together on a two-acre parcel of land in the panhandle of Texas. Williamson, 28, spent a decade learning how to tan leather, build manikins, and mount animals from grizzly bears and bobcats to elk and zebras. But it wasn’t something he liked to talk about.

“I thought there was a lot of shame to it,” Williamson says smoothing a layer of salt across the pink flesh. “I thought it was a crude way to make a living. I remember all of our customers coming dressed in business clothes and thinking, ‘Oh man, those guys, they’ve got the good life … I didn’t like to tell people my dad was a taxidermist.”

Williamson’s parents divorced when he was a baby. Growing up he spent weekends working in the taxidermy shop with his dad. By age 10, Williamson was his father’s right hand man after he broke his back in a motorcycle accident. During reconstructive surgery his father flatlined on the table.

“He died. For a few minutes he died, but he was brought back to life,” Williamson says before heading back into the garage. 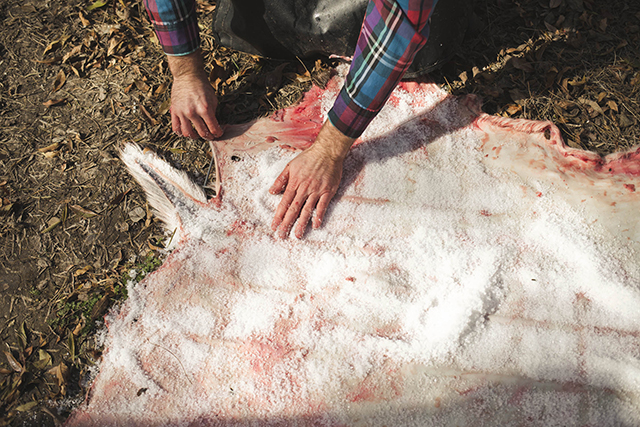 Williamson moved from Amarillo to Austin where he apprenticed for a local taxidermist to pay the bills while he studied accounting. He learned new techniques that produced better quality mounts and twice as efficient. After graduating Williamson scored a desk job. He worked long hours. He became confused.

“I realized just because you wear business clothes to work doesn’t mean you’ve got it made,” Williamson says.  “It’s really not that great to sit on your ass all day in front of the computer.”

Around the same time his father’s health began to fail. Williamson helped him close the shop and sell his home. Before leaving the property Williamson claimed some of the tools. Afterward he read the book Shop Class as Soulcraft: An Inquiry into the Value of Work by Matthew B. Crawford. He began telling people he was a CPA and a taxidermist. He found that no one ever asked about accounting.

Taxidermy makes some people uncomfortable. Animal skins are commonly worn in the form of shoes or draped around waists and stored in back pockets in the name of fashion. But the moment a skin is mounted to a wall, taxidermy becomes something macabre. For many people, death is something to put in the ground or burn to ashes, not put on display in the family room. However, taxidermy is a story people want to tell.

“They always want to tell the story,” Williamson says.

“So my dad turns around and walks to the house and he grabs a shotgun,” Williamson says. “He walks back to the shop, grabs the duck, throws it up in the air and shoots it. So that was my dad in a nutshell. You just don’t meet people like him anymore. He just didn’t have respect for artificial things.”

Williamson splays a freshly tanned deerskin atop his workbench. With a paring knife he shaves off portions around the nose. He scores the ears to prevent them from warping as they dry. Williamson threads a needle with fishing wire and sews tiny holes in the skin.

“It’s pretty cool to think this is just an old skin,” he says. “In a few hours it’s going to feel like it’s alive.”

Williamson’s father was a nurse as well as a taxidermist. He was a Vietnam War veteran and occasionally took in homeless men and women. He gave shelter to the outcasts in society. He was always poor. And he spent decades fighting with his inner demons. He died in 2010.

“I never really understood the whole rest in peace thing,” Williamson says while sewing the deerskin. “But that was the only thing I could think after he was dead. I hope that saying is true. I hope there is peace. I hope he is at peace.” 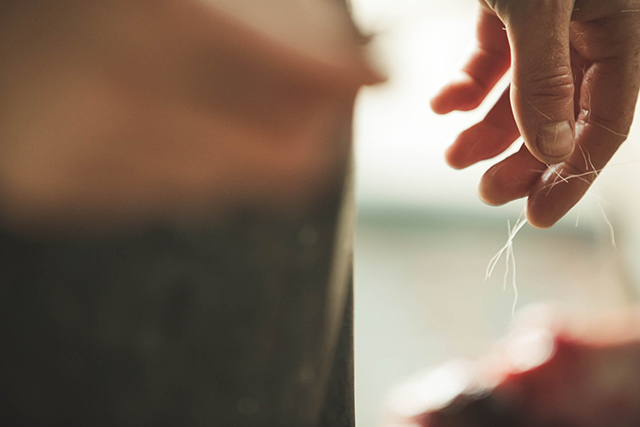 Williamson mixes a salve of epoxy and fiberglass and scoops it into the empty ear pockets of the deerskin. He molds them into an alert position and waits for them to dry before stretching the hide over the manikin. Afterward he inserts glass eyeballs into the sockets and gently smoothes strips of clay around them with his thumb. Dozens of antlers once belonging to foraging deer, elk, and reindeer hang from the rafters above. Three newspaper stories from the Amarillo Globe News are framed on the wall and span nearly 40 years between publishing. One is a profile of his grandfather and the other two features are about his father.

“Taxidermy is kind of a lonely profession, but you find in any business that people stay in it because they love the work,” Williamson’s dad says in one story.

Williamson listens to the quote while tucking the skin around the deer’s eyes into grooves carved into the manikin with a mottling tool.

“One of the problems I had with taxidermy was I didn’t feel there was a purpose to it,” he says. “Rich dudes are basically just hunting animals and it’s this way of showing off their socioeconomic status … but then I started doing CPA work and the same questions were being brought up. Is taxidermy a right or a good profession? Is being a CPA a right or moral profession? Who knows? Is it essential to society? Maybe if you just find something that you just halfway enjoy doing that will actually help out the world a lot more.”

“Maybe that’s the problem with taxidermy,” Williamson says. “There’s so much time to think you just think yourself into these spirals.”

Taxidermy is handling the remains of the dead. This can force one to think about how you live your life. On the windowsill between a canister of WD-40 and a jar of paintbrushes, a plastic Folger’s coffee can rests at eye level. It doesn’t contain coffee grinds.

“I think about my dad quite a bit. Basically all he lived on was cigarettes, Folger’s coffee, and work, so I figured this was a good place,” he says lightly tapping the lid. “I kept those specifically because he’s always been out in the workshop with me. That’s really my main memory of him. We went hunting a few times, we went on a few little road trips, but by and large all him and I did was work together. I think I owe the majority of the skills that I have to him.”

Nowadays Williamson works alone. If he listens closely he might hear his infant daughter crying inside the house or his 3-year-old son Wyatt laughing from the other side of the garage door. From the workshop Williamson can hear birds chirping and cars driving down the street. His mind wanders.

“It definitely does make you think about your own mortality,” he says. “You see how quickly life can be taken from you. I’m pretty sure that if we really grasped how short our lives are we would live it a little differently.”

Williamson recently quit his full-time job at an accounting firm and launched his business Wildlife Designs Taxidermy. Before giving his notice he asked his boss if he could work 40 hours a week for the next 15 years and delay pursuing the path to partner. His boss said it doesn’t work that way.

“I try to learn from people who have gone before me,” Williamson says. “Typically with men, their greatest regret is not spending enough time with their kids.” 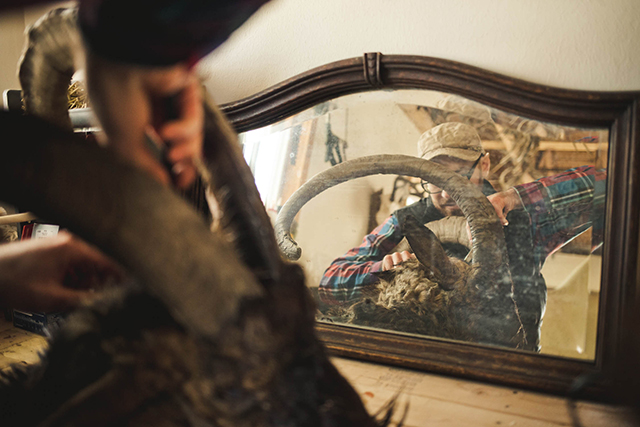 An hour later two men arrive to collect their trophies. A common hunting tradition is to have the first big game you kill mounted. The older man, wearing blue jeans and a cotton dress shirt, points out the various deformities in the antlers of his deer.

“They’re all unique,” he says tracing a point with his forefinger.

The younger man nods but never says a word. He looks as though he came from band practice. The father shakes Williamson’s hand and leads his son down the walk. The two men climb into the cab of a pickup truck.

“They’re both pretty different, but I think hunting is something they both share,” Williamson remarks as the truck pulls away from the curb. “[Hunting] is a really long process. You have to drive out to a ranch. You usually sit in a deer blind and wait for a deer to come by. Then you shoot it together. You skin it and gut it together.”

Sometimes all a father and son have in common is the time they spend together.

“Most of this is just preserving the memory,” Williamson says gesturing to the mounts in his garage. “To some people it’s art, to some people it’s decoration, but to those guys when they look at those horns, it’s going to take them back to the hunt and they’re going to remember it.”

He lifts a green wing teal from a shelf below the framed newspaper clippings. Williamson’s dad mounted it for him years earlier.

“I shot this duck. And I remember the story of my dad and me,” Williamson says. “When I see it I don’t really look at the duck so much. It takes me back to the moment and it’s really nice.”