Talent - A combined effort by Lowe’s staff and local talent.

The Unexpected - A low-key tutorial of how to build a house.

Spontaneous Inspiration - Climbing amid the rafters of a freshly framed home.

Parting Creative - A library of still images to be used for promoting professional services offered by Lowe’s, geared to industry professionals.

Production Window - 11pm to 7am #midnightoil

The Unexpected - Special made Best Buy apparel worn by the staff and used only for photo and video production.

Prop Love - Everything and anything sold in Best Buy retail locations.

Set Surprise - An espresso machine provided by the producer to keep everyone energized.

Spontaneous Inspiration - The upbeat attitude of all the Best Buy employees, coming in to celebrate all-nighters with us.

Parting Creative - (60) final still images supporting the “Embrace your Potential” campaign as well as the JCP Director’s cut highlighting some of our favorite moments in motion.

Lands’ End | Behind The Logo

Location - Timberline Lodge, located at the foot of Mt. Hood – an elevation of 5,960 ft.

The Unexpected - Nothing better than a run down the slopes of Mt. Hood in mid-August.

Prop Love - Original Tucker Sno-Cat dating back to the 1950’s – still making its presence known at the lodge.

Set Surprise - The infamous axe from “The Shining” greeting guests as they enter the lodge.

Parting Creative - An ADDY winning installment of Lands’ End’s “Behind The Logo” video series featuring the historic Timberline Lodge and the staff that care for this national landmark.

Lighting – Ambient with fill from the ice.

The Unexpected –  Tight timing for our stylist to find an NHL style customized uniform for the second player.

Prop Love – The Zamboni for the win – smooting everything out for blades of glory.

Spontaneous Inspiration – Justin’s kind demeanor and professionalism during the shoot.

Weather – The shoot was all indoors so it was perfect for playing hockey.

Parting Creative – A collection of custom imagery and video capture for Burns & Wilcox through Doremus NYC.

Production – We leveraged our time and crew after a commercial production to shoot “Make History,” a personal spec project honoring International Women’s Day.

Brand – We often tie brands to spec projects. Under Armour felt like an ideal fit in terms of a full line of clothing and footwear, as well as having a headquarters based in Austin.

Lighting – A mix of ambient and background city lights.

The Unexpected – Prop and wardrobe shopping with the second camera operator a few hours before meeting up with the talent.

Prop & Styling Love – A variety of clothing from Under Armour and of course, running shoes.

Set Surprise – The endurance and stamina of the runner.

Spontaneous Inspiration – One location inspired another and another...

Edit Inspiration / VO – Helen Reddy from “Accomplished Women.” Our editor Nathaniel Schmidt found Helen's historic talk. The energy and messaging felt a natural fit to the vibe and inspiration of the edit. Our subject / model and athlete Niccole Crank is a mother, runner, teacher with a wide range of studies including an MA in English.

Ramada Worldwide | Behind the Scenes

A glimpse into the behind the scenes making of the Ramada Worldwide "Say Hello To Red" spots.

A pre / post-color grade comparison highlighting our collaboration with Nice Shoes and their colorist Oscar Oboza.

Lure of the North | Finland MN

Presented by Jonathan Chapman | JCP in partnership with The Great Northern Festival.

A short film highlighting the passion and intrigue surrounding the winter sport of dog sledding.

The film profiles Blake and Jennifer Freking, a musher family from Finland, Minnesota who care for 60+ purebred Siberian Huskies. With over 20 years of working with the breed, they have each competed in numerous long distance dog sled races such as the Iditarod, Yukon Quest, and John Beargrease Marathon. The film explores the challenges of living and raising a family off-grid in the snowiest region of Minnesota and captures the Frekings’ devotion to the sport, spirit of adventure, and commitment to the well being of their huskies.

More information on The Great North Festival and their mission at: thegreatnorthernfestival.com

”Lure of the North” Film Screening | The Great Northern Festival 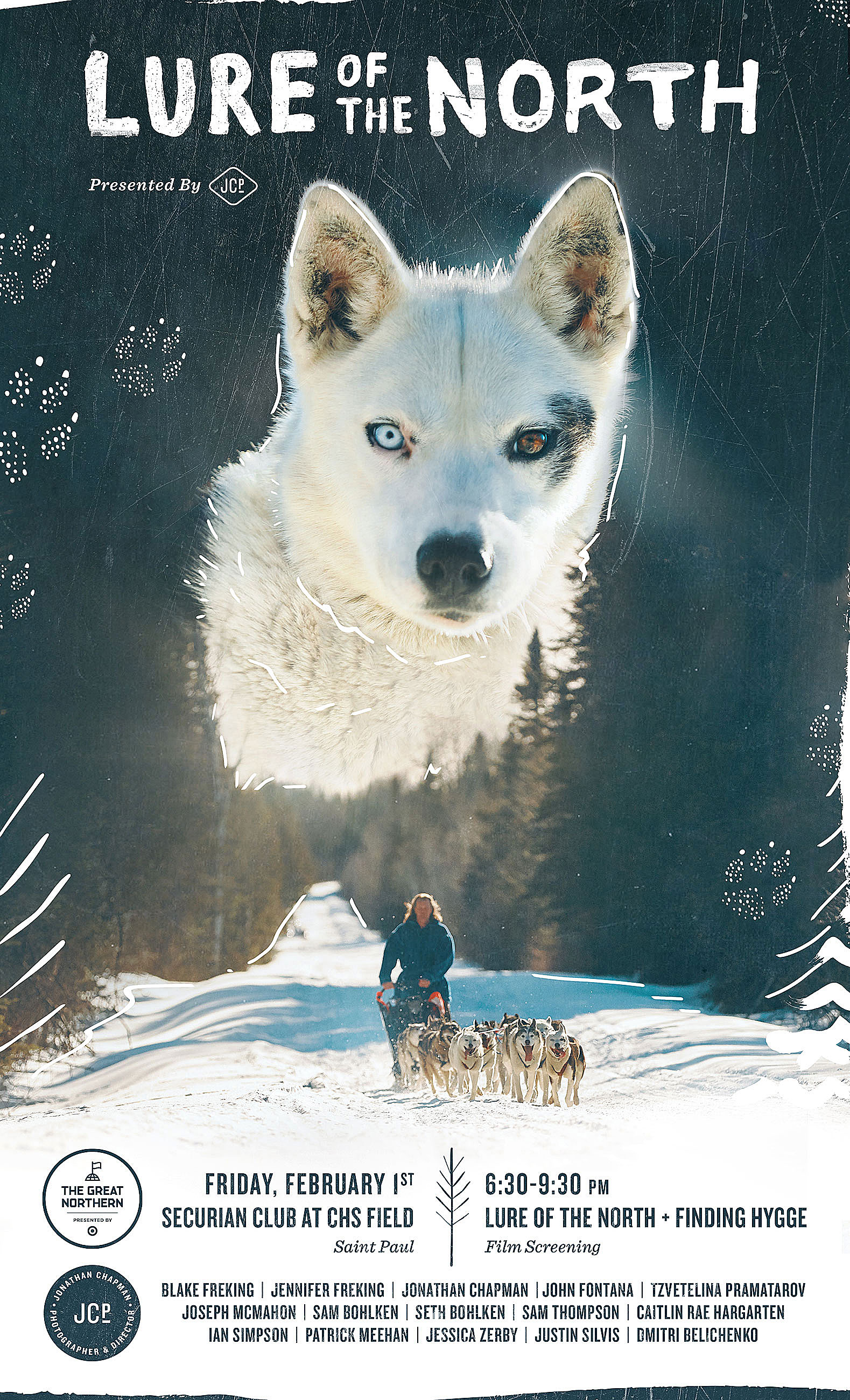 JCP is excited to be partnering with The Great Northern Festival to host a screening event for short-film “Lure of the North” (JCP production) and feature-length documentary “Finding Hygge.”

The event will be Friday, February 1st at Securian Financial Club inside CHS Field in St. Paul. Doors will open at 6:30 pm and the film will start at 7:00 pm.

“Lure of the North” profiles Blake and Jennifer Freking, a musher family from Finland, Minnesota who care for 60+ purebred Siberian Huskies. The film explores the challenges of living and raising a family off-grid in the snowiest region of Minnesota and captures the Frekings’ devotion to the sport, spirit of adventure, and commitment to the well being of their huskies.

“Finding Hygge” explores the concept of hygge, which has exploded in popularity amidst growing division and distrust around the world, but the Danish word and its definition are more complicated than it seems. For those who seek happiness, this exploratory documentary travels around the globe to discover the true meaning of hygge and how to find it.

The Frekings along with a few of their purebred Siberian Huskies will be in attendance to share more about their adventurous lifestyle in northern Minnesota.

This family-friendly event is free and open to the public.

To find out more and RSVP to the event check out The Great Northern Festival.

“Lure of the North” trailer:

Lighting – Arri Sky Panels, Area 48, Fiilex P360EX kit, diffusion panels, mobile / tablet screens, and as always, as much natural light as we could channel. Chinatown’s hanging laterns added a unexpected element of surprise and wonder amid our after dusk shooting.

The Unexpected – Talent flew from San Francisco to Santa Barbara with the crew so they could capture authentic moments and create a sense of ‘personal space’.

Crew High – Capturing video and stills of the belly of planes arriving at LAX. Craft service and lunch was the In & Out Burger a stone’s throw from set.

Styling Highlights – The wide variety of props only found at McDonald’s, plus a few personal items from employees and patrons.

Talent – 98% real people casted on location in advance of the shoot alongside others discovered on the spot. Austin had a few agency hipsters mixed in.

Gear – We packed light and brought the essentials.

The Unexpected – Working with 3 PA’s in each market made for a multi-faceted crew with a lot of fun stories.

Spontaneous Inspiration - Powell’s Bookstore in Portland along with a few Blue Star donuts to top off the morning.

Weather – Four different areas of the country with a seasonal mix to keep things fresh.

Parting Creative – A robust library of stills and video to showcase all things McD’s.